To share your memory on the wall of Clement Durachko, sign in using one of the following options:

Clem graduated from Bald Eagle Area High School in 1970 and went on to get his Electronics Degree. Afterwards he joined the U.S. Navy (SeaBees Branch) and served his Country for 12 years. His first assignment was Japan during the Vietnam War. Clem spent several years at Chanute Air Force Base teaching electronics. He also spend several years on the USS Dwight D. Eisenhower Air Craft Carrier in Communications.

As a civilian, he worked for the United Nations and also worked for a Newfoundland Communications Company. His work as a civilian carried him to places like Greenland, Rwanda, Qatar, and Thailand. Clem also spent 14 months in Iraq.

Clem is survived by his wife, Leta Gosse Durachko, of Berwyn, Alberta, Canada; his father Clement P. Durachko of Clarence; sister Alice A. Stedman (Reginald) of Bellefonte; brother, David L. Durachko (Benildes) of Clarence; sister Ellen Durachko Feeney of Norway, Maine; and brother Martin G. Duracko (Lori) of New Bethlehem. Clem is also survived by his Canadian family brother-in-laws Alfred (Geraldine) Gosse and Jim (Eleanor) Gosse of Torbay, Newfoundland; and Eugene Gosse of Vancouver, British Columbia.Clem is also survived by his loving nieces and nephews and cousins of Canada and the US.

Clem was preceded in death by his mother, Georgia A. (Watt) Durachko and his mother-in-law, Sarah (Ryan) Gosse and father-in-law, John T. Gosse both of Torbay Newfoundland.

Clem loved Newfoundland and his ocean home. He and Leta were planning to move back to Newfoundland in July. He was a lover of the outdoors and did a lot of camping, canoeing, hiking and traveling. He was an adventurer at heart. Clem will be laid to rest in Clarence, Pennsylvania.

Due to the covid-19 pandemic, all services will be postponed until a later date which will be announced. Contributions may be made to the American Cancer Society.
Read Less

To send flowers to the family or plant a tree in memory of Clement J "Clem" Durachko, please visit our Heartfelt Sympathies Store.

Receive notifications about information and event scheduling for Clement

We encourage you to share your most beloved memories of Clement here, so that the family and other loved ones can always see it. You can upload cherished photographs, or share your favorite stories, and can even comment on those shared by others.

Posted Oct 25, 2020 at 10:11am
Grace and I are so sorry to only learn today (Oct 25) about Clem. Our condolences to Leta and his US and Canadian families. I first got to know Clem in the mid eighties when we both worked for Atlantic Exploration Services in Newfoundland and later for Sealink/Stratos. The most fond memory was when we worked together in Tors Cove, Newfoundland, building and running an HF radio station for maritime and aeronautical communications. We again worked for the same company (EMS Technologies, Ottawa) when Clem did a long stint in Iraq. Clem was very good at what he did and very easy to work with. Simply a great guy.
Comment Share
Share via:
AG

Posted Oct 03, 2020 at 11:13am
Uncle Clem will be so missed by his family in Maple Ridge, BC. He was a frequent visitor and would spend hours with his nephew Todd talking and solving all the worlds problems. :) He was a quiet gentle soul that would do anything for anyone, with animated stories of the adventures he had in his life. By his side always was his little Leta, lovingly known as Auntie Lele at our house, who shared his love of nature, going wherever the jeep would take them, and the family of dogs they loved over the years. Clem you will be missed so much by Todd, myself Anne, Dabria and Dawson. You still come to our home, I know you do, and you are still more than welcome. XOXOXOXOXOX
Comment Share
Share via:
N

Posted Oct 02, 2020 at 06:36pm
Uncle Clem was my favorite uncle and it was such a shock to find out he was sick. My heart was broke to not be able to be with him and aunt Leta at that time. Loved my outings with Clem and Leta and dogs. Wish I could of visited in AB, it seems so long since I seen you. I have lots of good memories that I'll never forget. Love you Uncle Clem. Hugs and kisses to heaven.

Posted Oct 02, 2020 at 06:30pm
We would like to offer our deepest condolences to Leta and all the Durachko family on the passing of Clement and Georgia. We have been neighbors of Leta and Clement for many years. They are wonderful friends and we will surely miss Clement. I met Georgia and she was a lovely woman. I am sure everyone must be devastated to lose two wonderful family members. Rest in Peace Clement and Georgia. 💗💗 Love Marilyn and Joe Coady
Comment Share
Share via:
J

Posted Oct 01, 2020 at 08:59pm
I was shocked when I heard the news of Clem's passing. I worked with Clem while I was in Peace River, Alberta. He was a great co worker and a great friend. I am glad got to meet Clement and his wife Leta. Till next time sore with the Angel's.
Comment Share
Share via: 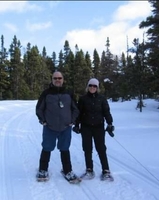